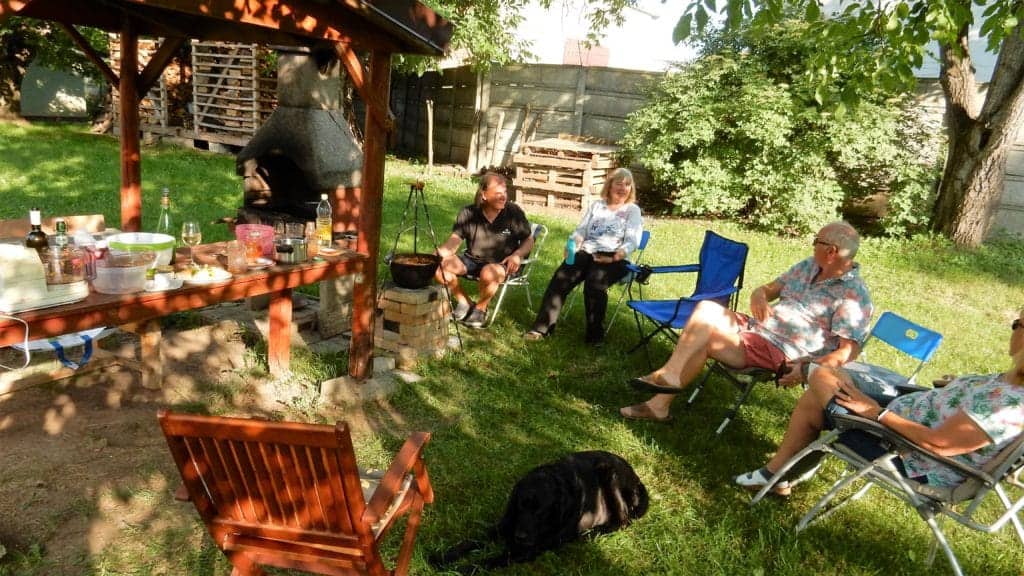 Our lovely hosts at our current campground, Nico and Lucia, had offered to cook up a large batch of Romanian Goulash for us and the British couple in the campground.  Lucia said that she needed a lot more paprika to make the goulash.  Mike offered to go to the store early the next morning to purchase it.

Lucia said that she needed huge amounts of paprika, like an armful, and she wanted red and orange and green paprika.  I said that I was very surprised as I had only seen Paprika in small spice containers and that it was always red.  The British couple also were surprised but Lucia insisted that we would love her special Goulash.

Mike went to the store early the next morning and comes back with 40 bags and containers of items containing paprika or similar coloured items.  Who ever thought that one Goulash could use so much spice.

Since Lucia wasn’t around when Mike got back from the store, Mike simply placed all the bags on the picnic table.  When Lucia saw the table a few minutes later she looked absolutely dumbfounded.  This wasn’t what she wanted at all.  There was a slight translation problem from Romanian to English.  What she had wanted was bags of sweet PEPPERS, red and orange and green!

Luckily, instead of getting frustrated Mike saw the very funny side to this, and quickly said that he would go back to the store and try and change the items.  In Romania they don’t accept returns like we do in Canada, which was a concern.  Lucia wrote out a long note in Romanian explaining to the supermarket what had happened.  Mike had already decided that if the store wouldn’t take the paprika back, he was going to stand right outside the store entrance and hand out free bags of paprika.  When Mike got to the store everyone working there had to read the note and get involved with the returns.  It actually ended up taking three or four people to decide that yes, he could return some, but not quite all, of what he had purchased.  He then purchased the sweet peppers and put them back on the same picnic table.  All this before 10 am in the morning!

The British couple, who were under the same misunderstanding that we were, thought this was hilarious.  While they were out that afternoon they saw a shopping bag covered in pictures of large peppers.  They said that they couldn’t resist buying it for Lucia.

The story had to be retold a dozen times that evening in front of the grill.  I was a little concerned because I don’t like spicy food, but I wasn’t the only one so Lucia made it just right for us.  The Goulash was excellent, and she followed through with ice-cream covered in a chestnut puree that she and Nico had made.  After that Lucia brought out her board and bell.  This is another tradition at this campsite.  Lucia and Nico walk around carrying a board of shot glasses filled with schnapps with a bicycle bell mounted on it.  They ring the bell as they walk and campers can come out and enjoy a glass on schnapps courtesy of their hosts.  Simon entertained us on the guitar for a while and then we called it an early night.

It was a great day and luckily everyone could laugh at themselves and enjoy the results.