After seven days we are leaving the campground in Harkány which is half an hour south of Pécs, one of the larger cities in Hungary.  This is another “thermal” campground.  We didn’t take advantage of the swimming here, but I did indulge in a massage at the spa, lovely.  This campground is the closest to a “North American” campground that we have seen in Europe so far.  Every campsite has direct access to water, electricity and sewage dumping.  This means that you don’t need to move the camper within the campground every three or four days to get to a common services area.  The actual campsites aren’t as large as in North America and when we open our awning we take three full spots in the campground.  Luckily, we were only charged for one.

All the other campers were from Germany.  It isn’t like Germany is next door.  One family lives 1,100 km (almost 700 miles) from here.  I am not sure if Germans have an especially close relationship with Hungarians or if Germany just has a lot of people who love camping and they fill all the campsites in Europe.  The weather here has been 24⁰C or 75⁰F and very sunny.  Although that sounds lovely, and it is, it scares me.  Someone told us that summer was here, and things would just keep getting better.  By better I think that he meant warmer.  Low seventies or around 22⁰C is our favourite temperature for walking, biking and sightseeing.  Mike and I are not lying on the beach people.  The last few summers have been quite cool which suited us fine, it was just the rain that we didn’t like. 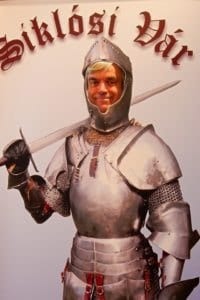 We drove back and forth into Pécs a few times.  It was too far to comfortably bike, which was too bad.  We did bike one day to the nearby town of Siklós and came home a roundabout way.  This small town had a great fortress that we explored.  That trip was about 17 km or 11 miles which was easy to do.  At the end of the day your leg muscles, with the electric bikes, are nowhere near as sore as they would have been in the past.  Of course, your bum is just as sore as it ever was after biking 17 km.  I am afraid that the motor doesn’t help that at all.,

I find it surprising that all over Europe, everyone from little kids to adults, wear t-shirts and jackets etc. that have English sayings on them.  In most cases the people wearing the clothes have no idea what the words say.  I said that I am surprised, but I shouldn’t be.  Mike and I used to own a painting with Oriental symbols on it.  Not only did we not know what it said, we didn’t even know which way was up!  Mike was always concerned about what the message in the painting might have said.

Yesterday we walked into the village where we were staying to get Mike a haircut and lunch.  In the restaurant Mike asked for a menu, which the waiter said he would bring.  A few minutes later a waitress arrived with a bowl of soup.  It looked like almost everyone in the restaurant had the soup, so Mike decided to go with the flow, and eat the soup which turned out to be very nice.  We were still waiting to see if we would get a menu and choose what to eat when lunch arrived.  It was French fries and pork and tasted quite good.  90% of the customers were eating the same dish.  I am guessing that it was the daily special and that is what most people choose.  This time the meal and the price were both good, but these misunderstandings don’t always work out so well.  In Hungary you can find ice cream stores and pizzerias on every corner.  There are also lots of bakeries and stands that sell Langos – remember those deep fried “elephant ears” that I mentioned previously. 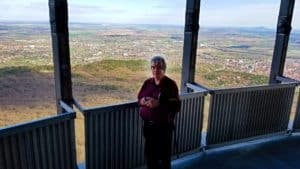 In Pécs, there is a very tall TV Tower that sits on top of the tallest hill in the area and stands out on the horizon.  Half way up there is a restaurant and a 360⁰ viewing platform.  You could see for miles.  For those that know Mike isn’t really keen on heights, he was standing on a very solid platform. The view was just gorgeous, but it was the type of view that really doesn’t show up well in pictures.  I don’t care about the photos, it was absolutely lovely to see.  We were in the car driving up to the TV tower on little zig zag roads going up the hill.  The roads weren’t signed very well and we ended up going in circles. What the GPS said would take us 10 minutes, actually took a full hour.  It is lucky that we aren’t in any hurry these days.

While in Pécs, we stopped at T-Mobile to top up our phone data cards.  If we are going south to Croatia, we can probably do without but we are leaning towards going east to Transylvania which means that we will be in Hungary for another couple of weeks and we need internet.  The cost was going to be about $40.  Here is the rub. You can pay T-Mobile $35, or you can pay them $50.  They will not take $40.  This means that we have to pay $50 and then have a credit with them of $10 that we will never use.  Some “pay as you go” plan.  What a rip-off.  Thank-you American company.

We looked inside the large cathedral and there was an all girls’ choir performing.  The cathedral looked lovely and what a great setting for the choir.  Sunday, in Hungary, was election day.  Doesn’t Sunday make a lot more sense than a week day like we use?

When we left Toronto, we intended to get to Croatia, our first main country to explore this year, in the first or second week of March.  We got delayed enjoying Budapest and then the Lake Balaton area, but we did keep heading towards Croatia.  In this campground we are about one hour from the Hungarian Croatian border and expected that our next stopping place would be in Croatia.  Well, in our well-planned trip, we have changed our mind multiple times in the last few days.  I think I mentioned earlier that I was interested in seeing Transylvania.  Driving around Transylvania is a fair distance and I knew that once we were in Croatia we wouldn’t get back to Transylvania.  Yesterday afternoon we decided that we would head east to Transylvania before going to Croatia.  Yesterday evening we decided that it was just too far, and we aren’t sure if there is a theft problem that we need to worry about. We then decided that we were going to skip Transylvania and head south to Croatia.  Just before bed, I was reading about the medieval cities and the scenery in Transylvania and we changed our minds yet again.  As I write this we are actually in the RV driving EAST.  This means that our early March arrival into Croatia will now be late May or even June, who knows.  We may change direction yet again.  I hear that the Black Sea in Bulgaria is super ?

Updates:  It is Friday 13th and maybe that is the reason today just isn’t working out the way we wanted.  There is a town called Szeged that is right on our route east and it looked to be a fair size.  We thought we would stop there for a few days.  Although there are quite a few campgrounds in the area there is only one open at the moment and it is north of town.  Mike liked another campground that was about 1 ½ hours past Szeged but I thought that was too long a drive for one day.  When we got close, I found out that the campground we had chosen was over 30 minutes north of our route which meant an extra hour of driving there and back.  We decided that we might as well stay on route and head for the one 1 ½ hours away.  It wasn’t yet 2pm so we were fine for time.  I will say that the roads we have been on today varied a lot, from North American highways to Norwegian narrow roads.  All along the route we saw signs advertising some historic place in Mako, Hungary. The campground we were now aiming for was just past Mako.  As we drove through Mako we commented on what a lovely town and area it appeared to be.  Nice bike trails, parks, churches, historic buildings and cafés, it looked wonderful.  It looked like we could easily spend a fair number of days here.  I had been trying to find somewhere that we would be coming back to, so that I could have some mail sent from home.  Mako could be on our route both into and out of Transylvania.  We got to the only open campground in the area and the railway bridge at the entrance said 3.8 m high.  We are 3.9 m tall!  We got close and started under the bridge and then decided we couldn’t make it, unhooked the car, and backed out.  We had expected to stop in two towns for 4 – 6 days each enroute to Romania.  How things change.  We are now heading directly for a town in Romania called Arad.  It is another 2 hours from here.  Mike called them, and the gentleman spoke English and said that they could take our size and that they were open very late.  It will be at least 6 pm before we can get there.  From taking 6 weeks to get a few hours from Budapest, we are now driving almost across the country in one day.

Arad isn’t in Transylvania, but it is in Romania.  I know nothing about it and I don’t know how long we will stay there.  An hour or so past Arad is the town of Timișoara that we will probably spend a few days in.  I guess that we just threw our $50 for Hungarian internet data down the drain.  I will keep adding our progress today to this note before I actually put it on the internet.

** Just passed through customs into Romania.  Had to choose between a lane for cars and a lane for buses, what are we? The police looked at us funny but quickly checked our EU passports and let us right through.

*** It is now 9 pm and we have finally arrived.  Traffic was absolutely awful, what a long driving day.  It turns out that we are 22 km past Arad and each kilometre was very slow.  It puts one off the thought of going back into town.  The campsite is very tiny with lovely trees that have all just come into bloom.  We just squeaked past the gate to get in and I am afraid that the trees have fewer blooms than before we arrived.  We did call and tell them our size before we left Hungary.  I am afraid that there might be a even more blooms on the trees when we try to leave.  The woman and her daughter are adorable.  The little girl gave me flowers (that we knocked off the tree) and her mother has given Mike a bottle of Romanian apple cider to try.  Other than feeling bad about the trees it is a very nice introduction.  We are the only campers here.  The husband is in the city at the moment.  We will talk with him tomorrow.  His wife says that he can tell us all about campgrounds and where to go and what to see in Romania and specifically Transylvania.  We look forward to talking with him and believe that he also speaks some English.