It is Friday afternoon and Mike and I are driving away from Budapest and I feel awful. Our very generous hosts where out when we left and we didn’t have a chance to say good-bye properly. As it turns out we may see them again in a few days. We had a parcel expedited to their address in Hungary that is now scheduled to arrive on Monday, eleven days after it was ordered. So much for paying for express delivery. If we stop for a few days, somewhere within an hour or two of Budapest, then we may drive back to pick up the parcel otherwise our Hungarian hosts will have an English camping book. My last article was about Budapest so this is largely miscellaneous things that we have seen and done in our first week back in Europe.

One thing that surprised us in Hungary was how often we had to pay for items in cash. There are a lot of places that do not accept credit cards.

Although we spent a lot of days in the Budapest area we didn’t really spend a lot of time in the city. Before we left for Christmas we were running around trying to get an emissions test for the Lincoln and winterizing the RV etc. When we got back we had a lot of unpacking and repacking to do. In the past we kept our bicycles on top of the Lincoln but that created quite a few parking problems. In many of the European cities there is much more room to park inside under the buildings, than there is on the street. With the bikes on top of the car we didn’t fit in the indoor parking lots. Last year we had the bikes on the roof of the car and a boat and motor inside the car, with just enough room for Mike and I in the front. With the new electric bikes we wanted to change this around but we have very limited space. With a lot of time and work, mainly on Mike’s part, we have managed to get one electric bike and the 8HP boat motor in the trunk of the Lincoln. The second electric bike is in the back seat of the car. The boat is stuffed underneath the RV and we have had to give up some items we had in storage. Mike has also taken apart our two old bikes and stored them underneath until we know if we need to still use them, if we are taking them to Canada or just giving them away.

We shipped the electric bikes from Canada via a cargo ship which was a huge hassle. An even bigger problem was trying to ship the batteries that were considered hazardous good. Apparently they can’t go by plane, not even a freight one. Eventually the store that we bought the bikes from arranged to ship the batteries directly to Hungary from China. That helped a lot. Mike put the bikes together and we took them out for a quick test. We will have to do some learning and I think Mike will have to try and do some adjusting. They are very sensitive. Sometimes, as soon as you start pedaling a little, the bike shoots forward. The area around here is full of potholes, mud and water so we were riding on the very bumpy sidewalks. I shot forward once into a group of three people and, very luckily, didn’t hit anyone. Some of this is experimentation and learning and some might be required adjustments to the motors. In our only short ride so far, we did learn that it seems to work best if you just put the bike in a high gear and leave it there. Forget standard shifting up and down. The power seems less sensitive in the high gear and you can compensate with the throttle or pedal assist instead of shifting gears. We will have to see how this works out. I am still really hopeful that they will allow us to do much longer distances on varying terrain. I would like that in good weather. RIght now, the weather isn’t appropriate for bike riding, at least not for rookies.  When it is we will take a picture of us on our new e-bikes.  Notice that we didn’t get rid of our original bikes yet ?. 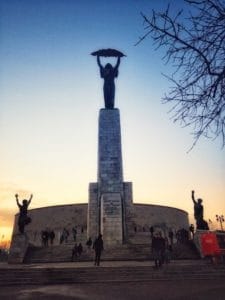 On the top of a hill, very prominent on the skyline, is the Liberty Statue aka Freedom Statue aka Liberation Monument. It was first erected in 1947, in remembrance of what was then referred to as the Soviet liberation of Hungary during World War II, which ended the occupation by Nazi Germany. After the 1989 transition from communist rule to democracy the plan was to destroy the monument to the Soviets. Luckily a compromise was reached and instead of destroying the entire monument all references to the Soviets, and some of the smaller statues were removed. The original inscription read: “To the memory of the liberating Soviet heroes [erected by] the grateful Hungarian people [in] 1945”. It now reads: “To the memory of those all who sacrificed their lives for the independence, freedom, and prosperity of Hungary”.

In one of the markets I decided to try Lagos, which are very popular here. In Canada we would call them “Elephant Ears”; large, somewhat flat pieces of fried dough with toppings. I ordered one with cheese and mushrooms. Although the Lagos was hot, the shredded cheese came out of a cooler and I think the sliced mushrooms came out of a tin from the refrigerator. The cold mushroom slices were most unusual and that is polite. It has scared me off ordering anything with sliced mushrooms for a while.

Along the subject of food, I decided to make my B52 cappuccino in the RV one evening. What a disaster.
– No Grand Marnier – terrible
– Cream liqueur, bought that day and stored in fridge, was solid, wouldn’t pour or even come out with a knife
– My lovely electric frother decided not to work (big problem, can’t be replaced in Europe and Mike hasn’t checked to see if he can fix it yet}
– My backup battery frother got temperamental and never made foam
– New espresso coffee machine made dirty water instead of espresso
Can you picture me by this point in time 🙁  I didn’t know whether to cry or to scream or to try both at once.

YEAH for TECHNOLOGY! It is unbelievable how much today’s technology makes traveling easier and greatly enhances the trip. As I have mentioned, Mike and I constantly use Google Translate to translate everything from conversations, to signs, menus, parking meters, internet web pages and more. I am not sure how we ever traveled without it. I do remember my father in a restaurant in Portugal once, flapping his arms and clucking.  He wanted chicken for dinner, I thought he might get eggs!  We use an app called izi Travel. Without needing internet access, with izi we open a downloaded city tour and, as we walk around, our Bluetooth headsets start talking to us and telling us about what is around us. We use an app called Parking that knows where we left the car. When we say we want to return it passes us to Google Maps and the same Bluetooth headsets start telling us where to walk and where to turn to get back to the car. All this with our phones in our pockets.

These are the newer benefits from technology. This doesn’t include the capabilities that we have used for a while such as currency translation, GPS, mapping, finding campgrounds, finding sewage dumping locations, finding propane, having 4,000 novels on my phone to choose from and on and on and on..… You just have to love technology. 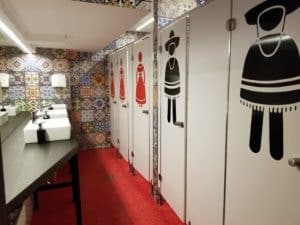 Washrooms are treated differently in Europe than in North America. Having to pay to use the toilet is very common. I remember that we tried this in Canada at the large department stores when I was a young child. It didn’t last very long. Also, there is a lot less concern about gender in washrooms. You will often find a single washroom area with mirrors and sinks and stalls. The stalls can be used by men or women. This picture is from a restaurant where, for some reason, they chose to designate the stalls by sex. Given they were identical inside, I thought this was surprising.

All my thanks and appreciation to my mechanically inclined hero! In our RV small problems can turn out to be major ones since we are in Europe and they have never heard of our type of mobile home. Not only are parts not available nor is the expertise to fix large motorhome issues. Most recently: the fridge stopped working – panic – not replaceable, the propane and heat quit working – minor panic, almost had a problem opening and closing sliders, sewage tank issues, toilet leakage, American internet antenna still isn’t working properly etc. You could not make this trip without a mechanically inclined participant. As it is, many of the issues are short term panics until Mike figures it out and gets things fixed. Since I know that he enjoys having things to do, I do my best to help.  Small problems are always to be expected in an RV, they are just much more significant when you are 7,000 kilometres from home. Thank-you Mike!

With Mike along, all these issues so far have been relatively minor and are completely offset by the enjoyment of living here in Europe. There is no where we would rather be right now than living and traveling the way we are. 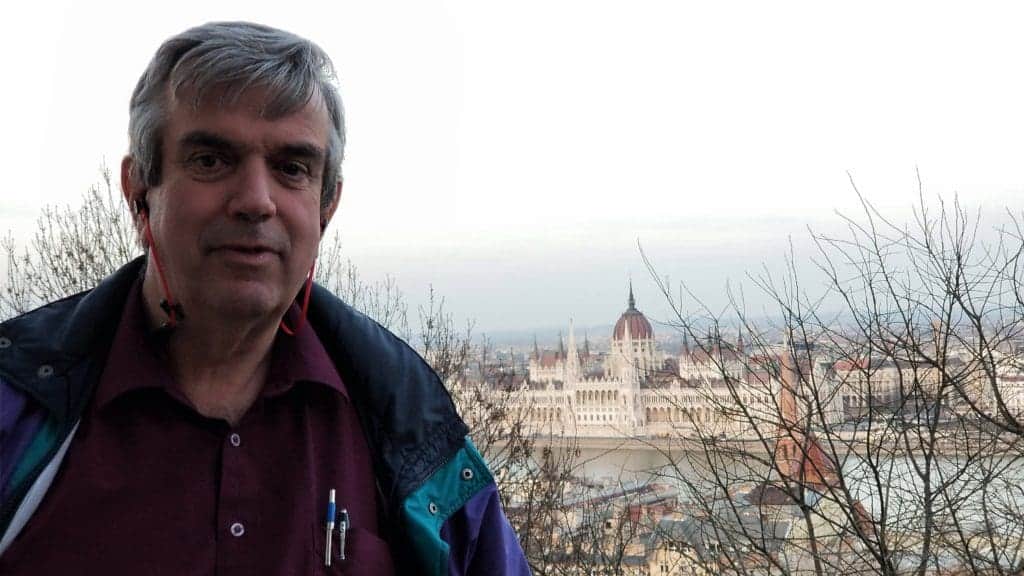