Today is catchup in my writing.  I hope to get this posted sometime soon but we are in an area of no cell phone or internet coverage.  It is late Saturday afternoon and Mike and I have just left Banff.  We considered staying an extra day but the campground was full so we just parked in town and wandered around some of the museums and cafés for the day and then left late afternoon.  I am doing this backwards but I will tell you that I got up this morning and put my long johns and sweater on like I have every day for the past week and it turned out to be 80 degrees F (27 C) in Banff.  I was rather uncomfortable until I found somewhere to divest myself of some of my clothes.  Actually the very cool weather hasn’t bothered us at all.  We prefer it to the heat wave I hear they are having at home. 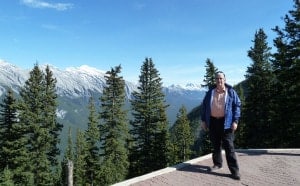 What has been a disappointment all week has been the drizzle and the very, very low clouds.   As you know we took the cable car up in Jasper and it was a disaster.  We did the same thing in Lake Louise and it was OK, the clouds were a little higher.  We took the Banff Gondola to the top of the ski hill and it was beautiful.  We still enjoyed our time in the Jasper/Banff area and spent a full week here.  I would say that the scenery was very pretty most of the time instead of spectacular which is what it was when the clouds occasionally lifted higher.  We got in some nice walks around the Athabasca Falls and Lake Louise and Moraine Lake.  All lovely places but again our visibility wasn’t the greatest.  The last day and a half in Banff was our best weather by far.

About 30 years ago Mike and I last rode the Banff Gondola to the top of the mountain and as very silly young adults we decided to walk down instead of taking the gondola back down.  It was a really dumb decision.  On Firday the lineup for the gondola to go back down from the top of the mountain looked really long so Mike decided to prove that he hadn’t aged any in the last 30 years.  I wasn’t that dumb.  The gondola line turned out to move really fast and was about 10 minutes long.   I then got to wait for two hours at the bottom while my husband walked down the mountain.  As you can imagine that did him in for the rest of the day and didn’t help for the next day either.

Earlier we had seen a sign for a 4.2 km (2 ½ mi) walk that took you past an abandoned mine.  Mike thought this was a good idea so we started off.  It was uphill the whole way.  After about a mile or so I eventually gave up and turned around.  I hate hills on feet or bike!  I keep thinking this should get better with practice.  If so, I will need much more practice than what we are currently getting.  Anyway, Mike came back down with me.  At the bottom we found out that the 4.2 km was the distance ONE-WAY up this mountain.  They have a very bad habit here of sometimes showing the round trip distance of trails and other times showing the one-way distance.  Was I ever glad we turned around.  An hour or so later we arrived at Lake Minnewanka.  There was a short walk (3 ½ km, 2 mi) around part of the lake.  You had the trees on one side of you, the lovely turquoise lake beside you and the mountains on the far side.  The walk was relatively level with small inclines which was great.  That was my type of walk.

We spent one night at the Columbia Icefields.  Although they are the largest icefields in North America what you can see from the road is not particularly attractive in the summer.  You have one finger of the icefields coming down the mountain and it looks like the snow at the side of the highway with all the dirt embedded in it.  They are much prettier in the winter when they are covered with fresh snow.  Years ago Mike and I flew our small plane over this area.  The number of glaciers hidden from the roads was amazing.  About two years ago Mike and I spent a few hours in a Zodiac along the Pacific coast of Chile next to one of the few glaciers in the world that is still advancing.  We just sat there and watched this pristine glacier calving.  That was so fantastic. 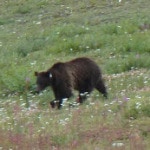 We have seen very, very little in the way of wildlife on this entire trip including in Northern Ontario.  A few deer, a cougar running across the road and a grizzly bear feeding in the distance.  I found it humorous to see some tourists taking pictures of a little chipmunk with their telephoto lenses.  I don’t remember ever not having dozens of chipmunks in the backyard.  It seemed strange to think that they were unique to some people.

One of the things I learned in the Banff Interpretive Centre was that black bears aren’t always black.  They can be black, brown, red or blond.    I had always assumed that the lovely turquoise colour of the lakes in this part of the world was due to the mineral content of the water.  That isn’t right.  Apparently when the glaciers recede they crunch up rock into small rock particles or rock flour.  It is the sun reflecting off these particles that give the glacier lakes their colour.  The colour changes in different seasons based on the amount of rock flour in the water from things like the spring runoff.

Even with the disappointing weather it was definitely worth spending a week here.  As everyone knows this part of the world is pretty spectacular.