The picture above is quite appropriate.  Mike and I have been in and out of Italy and Slovenia for the last couple of weeks.  I will tell you more about the photo in a few minutes.  We are still staying on the Istrian Peninsula in Slovenia and visiting Italy from there.  As I mentioned in the previous post Mike and I purchased the “FVG Card” in Trieste.  This card covers museums, castles and more throughout the Italian region Friuli Venezia Giulia or FVG.  An entire book came with the FVG Card on what was included but most of the attractions were too far away.  I put a limit of an hour or so drive to the sites we would look into visiting.  We ended up visiting three towns outside of Trieste that we found very interesting and that I would like to tell you about.

The first town outside of Trieste that we visited was Aquileia.  Here, the entire town is a UNESCO World Heritage site given this designation because “Aquileia was one of the largest and most wealthy cities of the Early Roman Empire.  By virtue of the fact that most of ancient Aquileia survives intact and unexcavated, it is the most complete example of an Early Roman city in the Mediterranean world.”  An audio guide of the town was included with our FVG Card.  Our wandering around town took much longer as we listened to the main audio tour and all the supplemental guides.  We were fascinated with it.

In the Basilica, shown above, is a phenomenal floor of Roman mosaics from 313 AD.    The floor is the largest paleochristian (old) mosaic in the western world (760 m² or 8,200 sq ft.).  The frescoes on the wall and ceiling behind the altar are from 1031.  The main ceiling itself dates back to the fifteenth century.  Over one thousand years of history in one building and it all still looks fantastic.  There are other mosaics on the property dating back to 1st century BC.  Mike and I saw what we thought was a Roman hot tub.  It turned out to be a baptismal font from almost 2,000 years ago.  There is a picture of it in the 2018 Photo Gallery.  The optional extras on the audio guide were exceptional in understanding and appreciating the mosaics and the rest of the town.

On the way back home from Aquileia we stopped in to visit the town of Grado on the waterfront.  We saw two churches dating from the 6th century that were still in use today.  One also had an impressive mosaic floor that had been restored.  Attending mass these days must make you feel like you are in an archeological dig.  How do construction companies ever get anywhere around here?  I am sure that city planners must make plans for roads and buildings and then when the building starts, Roman remains are found, and the construction stops.  It must be very difficult.

Grado has been equated with Venice in terms of its small alleys and cafes.  It is a spa town with a gorgeous beach waterfront as well as great history.  Look at the large pedestrian and biking area along the waterfront.

On our next day out, we visited a town in Italy now called Gorizia.  It was a very interesting town to wander around in.  As we almost expect now, there was a castle at the top of a hill.  We started walking slowly up the hill.  On the way we passed a small interactive museum with a 3D film talking about the history of the area.  It turns out that it was included with our FVG Card so we went in and spent an enjoyable ½ hour in there.  As we continued up the hill we passed a family coming down from the castle.  The man stopped to talk with us.  He told us that this specific castle turned out to be the highlight of their trip.  When we finally got to the castle, we saw that it was quite small, and actually looked quite livable.  The renovations had been nicely done and you were basically wandering through a museum as you walked through the various rooms. 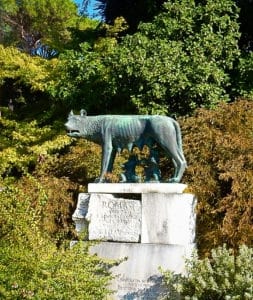 In town we saw yet another statue of Romulus and Remus.  Since ancient times, the image of a she-wolf suckling the twins has been a symbol of Rome and the Roman people.  I hadn’t expected to see this Roman symbol in so many different cities and different countries.  On a historical note the twins and the she-wolf were featured on what might have been the earliest silver coins ever minted in Rome.

Walking around we wandered into another palace or mansion built around the end of the 1500s.  It was the Coronini Mansion and the entrance to it was again included with our FVG Card.  You can begin to see why the cards are very helpful in getting you to see places that you wouldn’t normally get to, but they also make for very tiring days.  It was late in the day and we were given a private tour of the mansion.  It is now a museum but the Coronini family actually lived there until they died out in 1990.  There are 30 rooms and 15 of them are open to the public.  One member of the family worked for two Russian Czars and inherited a large amount of property from the Russian Royal family.  Many of the smaller items ended up on display in the Coronini Mansion.

As always finding dinner can be a problem.  If you only want drinks, alcohol or coffee and maybe sweets and ice cream, it’s easy. You can find that sold everywhere.  If you actually want to eat a meal life is much tougher.   Maybe people in this part of the world get together for snacks and go back home to eat meals.

Separate from the castle, the most interesting thing about Gorizia might just be its recent history.  Until recently there was a 5-foot-high wall down the centre of the city separating the old and the new sections.  The old city of Gorizia was founded in the middle ages and was very prominent during the Austro-Hungarian rule.  Until the end of the Second World War, Gorizia was Gorica, a Slovenian town and the major center of the Slovenian region. In 1947 the new borders between Italy and Yugoslavia resulted in a dramatic change: Gorica became part of Italy and was renamed Gorizia. In 1948 the town new or Nova Gorica was constructed by Slovenia (part of Yugoslavia) right on their side of wall.  When Slovenia joined the EU in 2004 the wall came down.  In 2007 when Slovenia joined the Schengen Zone the border checkpoints were removed, and it became a free and open border.

Since then Nova Gorica and Gorizia have joined in creating a common metropolitan zone, administered by a joint administration board even though the “city” sits in two countries.  I find that idea quite interesting.  Today in place of the wall, is the large medallion in the ground shown in the photo at the top of this post.

We have a few more things that we want to see in Slovenia and then, in a few days, we will be heading back into Croatia.  I will tell you about the Slovenian version of the Istrian Peninsula shortly.