We have only been in Bled for 2 ½ days and I can’t wait to tell everyone about this jewel.  I can’t say that Bled is a secret because we had been told by many people in every country that we have visited this year that we had to see Bled.  It has been on our list since day 1.  The photo of “the most beautiful lake in Slovenia” that you always see is one of a small island in the middle of the lake with a church on it.  We can’t use our boat motor in Lake Bled but we hope to inflate our boat and use paddles to visit the island which we haven’t done yet.  Bled Castle stands on towering rocks over the lake.  We will visit it soon.  In the picture below, you are looking at the island and you can just see the castle rising high in the background.

In the last 2 ½ days we have walked around Lake Bled, biked around a larger area and driven around Triglav National Park.  We still have a lot more to do but I wanted to show you a few photos and tell you about what we have seen so far.

It is 6km around Lake Bled, somehow it took us 12 km to walk around it with our small detours.  It is a lovely walk, largely along the shore of the lake.  It is definitely a tourist area.  The road into our campground is very narrow and some cars had to back up for us to get in.  You can sit in the café in the campground, overlooking the lake, the little island and the castle.  It is just lovely.

We found a bike route in this area on the internet.  It was just over 20km in a fairly hilly area.  We walked our bikes up one hill.  After all our problems with motors recently we weren’t taking any chances with our e-bike motors.  The weather has been gorgeous until today.  It is raining right now but that is OK because I tired myself out yesterday and staying in and writing this post is just fine with me.

Yesterday we drove around Triglav National Park. How beautiful.  Our GPS thought that the trip should take 3 ½ hours.  It was basing that on a 90 km / hr posted speed limit on mountain roads comprised of S-bends, followed by hair-pin turns.  We were lucky to be able to average 30 km / hr.  We stopped for a few hikes and we got back to our camper in the dark 9 ½ hours after we left.  I was exhausted.

We drove through the Vršič Mountain Pass which is the highest road pass in the Eastern Julian Alps at 1,611 m or over 5,000 ft.  According to the internet the pass has 50 serpentines.  I guess that is the official name for the S-bends that we were driving through for ages.  The views that kept appearing where just gorgeous.  The Julian Alps are the highest mountain range in Slovenia.  They lie in north-western Slovenia and north-eastern Italy, with the majority being in Triglav National Park.  The picture at the top shows Mike, standing near the edge of the cliff, with the mountains off in the distance.  They are much further away than they look.  Triglav National Park is very large, covering 4% of Slovenia.  These Alps were named after Julius Caesar.  At one point we took a wrong turn and ended up going through some abandoned control booths.  It turned out that we had entered Italy.  After about 5 minutes we turned around and returned to Slovenia, all without talking to anyone.  I told Mike that this didn’t count as “visiting Italy” ?. 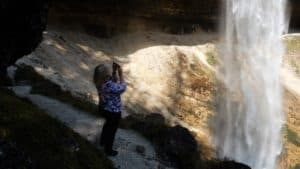 I thought it was interesting that the park, in English, is called Triglav.  In Slovenian they add “ski” on the end for Triglavski.  I am not sure why the name was changed when translated into English.  We stopped and hiked up one of the mountains to see one of many waterfalls.  You could walk behind the falls, if you were very careful.  I got close, but it looked too slippery for me to make it all the way behind.

We stopped to see another waterfall, but it wasn’t there anymore!  The entire river bed was dry.  We are guessing that a dam must have been built somewhere.

As we were approaching one particular hair-pin turn, with trees obscuring the oncoming traffic, we encountered a string of 5 or 6 motorbikes.  One of those motorbikes gave us quite a scare.  In addition to the driver, there was a passenger on that particular motorcycle.  We are not sure if this driver was trying to pass the lead motorcycle in the string but, as it came around the hair-pin turn, it was well in the middle of our lane.  If Mike had not slammed on the brakes, screeching to a full stop as we rounded the turn, we would have hit two people, and a motorbike with the front of our car.  At that point the motorbike almost came to a full stop as well before slewing back across the white line into his own lane.  There was no actual contact between our car, the motorcycle, or the riders, but we hope none-the-less that the experience left an impression on the reckless bike driver and his passenger.  It certainly gave us a fright.  It took a while for my stomach to settle down.

At about 5pm we got to the Tolmin Gorges where I had wanted to do some hiking.  They have a trail that, according to different people on the internet, would take between 1 and 2.5 hours.  I was quite concerned because it gets dark just after 7pm here, but I knew that we wouldn’t be back to this area.  It took 6 hours to get here and we wouldn’t be doing that again.  We read that the trail had 500 steps which I thought might kill me, but we decided to try it anyway.  Actually, the steps were spread throughout the gorge.  If you look at the photos you will see a couple of them that show bridges down below and up high.  They were all bridges on the path.  It was never really bright and sunny as it was too late in the day, but we did get back to the car before it got dark.  We were very glad that we had done the hike.  I was extremely hot and sweaty at the end which didn’t make for a comfortable car drive.

We still had a few hours of driving to get back to the campground.  The Tolmin Gorges had been our last planned stop.  After it got dark, we were driving on a winding mountain road (more S-bends and hair-pin turns) when, all of a sudden, we had this view that even in the dark told us that we had got to the top of another mountain.  I really wish that we could have done that drive during daylight.  We won’t get back to that road either.

We expect to be here for another four or five days.  We plan on going north to hike in the Vintgar Gorge.  We still want to get to Bled Island, and we still want to see the Bled Castle.  As you can see from the picture here, even the clouds love the castle, witness the heart.  There is a second, larger well-known lake with various natural sites in the area that we also want to see.  We may give a cycling expedition another try if the routes don’t look too steep.

It is still raining here but not very heavily at the moment.  Mike and I are going to walk over to the café overlooking the lake and have a lovely cappuccino.  We do look forward to seeing everyone at Christmas, but I must admit that we are loving our time in Europe.