It is June 21 and Mike and I are still in Romania.  And on June 21, Happy Birthday Mum.  Mike and I expect to be in Romania for another 7 – 10 days and then we will have to hurry to meet our friends in Croatia.  Our quick detour has turned into a three-month exploration.  Transylvania covers central Romania.  When we left there, we headed north to the Maramureș region.  We have now left Maramureș and are heading west.  We will be making a circle in Romania and will end up back at the first campground that we stayed in.  The owners at the campground were very nice and said that we could have a few items shipped to them.  In Europe they want you to have your country ID near the license plate on your car.  We bought some CDN stickers last year, but they are almost unreadable now.  We have some new stickers and a few other items being shipped to the campground in Romania.  When we leave here, we will cut through southern Hungary and rush into Croatia to meet up with some friends.

When I left off my last note we were in a huge thunderstorm at a campground in Săpânța and Mike and I had our neighbours laundry hung all around our living room.  The second morning, Jan and Geertje visited us again to continue drying their laundry from the day before.  It sounded so simple the previous day, when Mike offered them the use of our laundry machine.  The huge rains and thunderstorm and mud turned it into a big production.  Luckily, they were a very nice couple and the four of us could laugh together.  We hope to visit them when we get back to the Netherlands next year.

We have seen a few tour groups of RVs while we were in Romania.  There will be someone responsible for the trip who has booked all the campsites ahead of time, made sure that they are big enough for the group, and possibly arranged for some local evening entertainment.  They will often produce a very nice book showing the campsites, directions with maps and tourist information about what there is to do in each area.  The campers meet every evening at the campsite of the day but they don’t travel as a group during the day.  They get up at whatever time they want, do what interests them and meet up with their friends in the evening.  This sounds much better to me than a bus tour where you have to be up at 6 AM.

While we were at the campground in Săpânța a group of 12 RVs from France, some were actually vans, stopped for two nights.  Our campground was actually split into two halves with a restaurant in the middle.  Most of the French group stayed in the other half where we couldn’t see them.  Their first night in the campground was fine.  The next day was that huge rainstorm that I previously mentioned.  The river beside the campground had risen about 3 feet by 7 PM (1900 hours).  I don’t know if it rose more after that or not.  The side of the campground where the French vehicles were parked was muddier than ours for some reason.  I don’t know if they were scared about the river overflowing the banks or if they were scared of sinking into the mud but when we woke up the next morning all twelve vehicles were parked outside the campground, lining the edge of a very small street.  The small road looked like an RV convention.  They had all left the campground itself sometime the night before.  They had breakfast and left the area before we got a chance to go out and talk with them and find out what had happened.

In addition to visiting RVs, the campground had quite a few groups of 3 and 4 motorcycles staying while we were there.  Most of them slept in tents, I think that one lot stayed in the building which must have had some rooms.

Maramureș is known for its lovely wood carvings.  You see large churches and monasteries built entirely out of wood with great carvings everywhere.  Many homes have large wooden gates all beautifully done.  Northern Romania has beautiful scenery with the Carpathian Mountains all around.  I mentioned previously about the aggressive Romanian drivers who park anywhere.  Don’t get me wrong, they aren’t as bad as the drivers in Italy or India and they don’t park as bad as Parisians but nonetheless they are very aggressive and not used to bicycles.  The “main” roads are often only two lanes; one in each direction, and they are much narrower than our roads at home.  Mike and I are uncomfortable with the thought of biking on these roads with the Romanian drivers and the campsite owners have emphatically told us not too.  You do see a few bikes but not many in this part of the country.  Because of the mountains you don’t have the long minor roads running between villages that we enjoyed in southern Transylvania.  You often have a minor road that runs off the main one to one nearby village and then it ends.  This isn’t conducive to biking or even walking very much.  Hopefully as we get further south, back to the hills instead of mountains, we can get the bikes out again.  I have to add one extra comment, while the drivers here are very aggressive there is one area where a pedestrian is safe – on a crosswalk!  People don’t even look when they walk out onto a crosswalk.  If you cross the street without a crosswalk you are taking your life into your hands, at a crosswalk, you are as safe as you can be in Romania.

Here are a couple of things that we have noticed in our travels.  In much of Asia and portions of Europe and Africa, including Romania, the family name comes before your personal name.  This makes a lot of sense to me.   Addresses in much of Europe are also written differently than in North America, basically in descending order of importance: area (i.e. province/state/county) first, then city, then street and finally the house number.  These sequences for the names and the addresses make much more sense to me than the order we use in North America.  I must add that as an ex computer programmer, having the family name first or the city before the street makes much more sense when sorting, filtering and working with the data.

I think that I mentioned before that we have been very surprised at the size of many of the homes.  For some reason I expected homes to be smaller than homes in our wide-open spaces in Canada ?.  In many, many cases the houses in Romania are much larger than our houses at home.  We found this quite unexpected. 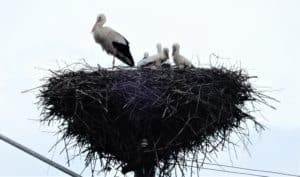 Earlier we posted a picture of a stork high in its nest on the top of a tall utility pole.  These huge nests are found on many of the utility poles in the rural villages and on the roads just outside the towns.  For some unknown reason you don’t see them on the roads in the countryside where there are no homes, but you see a lot of them in the villages.  Smaller birds appear to live underneath the nests in the bottom of the straw.  I don’t quite know how that works but you can see the small birds flying up into the bottom of the nests.  When we first took the pictures in April, you could tell that there were babies in the nest because you could see them being fed but you couldn’t see the little storks themselves.  Now they are all big enough that you can see sometimes 3 baby storks and 1 or 2 large parents in the nest.  The nests have to be really large and sturdy to take a family of storks.

The town of Sighetu Marmației has a museum dedicated to the Victims of Communism and the Resistance.  It was very interesting.  Related to this is a memorial outside of town called Pauper’s Cemetery.  It is where many of the political prisoners who died or were executed in the communist prisons were buried without gravestones or, in many case, without any records.  This “cemetery” was discovered when human skulls came to light under some horses’ hooves in the 1990s.  There were few obvious graves, just unidentified bones.

Not too far from the Pauper’s Cemetery is a large tourist attraction called the “Merry Cemetery”.  This cemetery was just down the street from where Mike and I were camping in Săpânța.

Next to the cemetery is a church that is in the midst of being completely renovated.  All the old paintings on the walls have been removed and they are in the midst of painting new ones.  In the cemetery are 800 gravestones referred to as folk art monuments. The crosses are carved from oak wood.  They are painted and have carved verses inlaid.  Most of the verses or epitaphs are short, but a few of them extend onto the back of the crosses.  The cemetery is a history of the life of the people with their various concerns, thoughts, feelings etc.  Some have a touch of humour hence the name “Merry Cemetery”.  In actual fact many more of them depict dramas and tragedies and not humour.  Every cross has a painted picture showing the person at an important moment in their life.  The pictures often, but not always, depict the person’s occupation.  This cemetery was ranked 2nd in the world, after the Valley of the Kings, at the Funeral Monuments Symposium.

Below I have included translations from three of the oak crosses.

“Plum brandy for some is poison, And becomes the road to sorrow, It only Glied my life with torment And placed me under your feet.

Those who love the plum brandy, listen, Learn from my experience and death As I hold tight to my bottle.

Here Lies Dumitru Holdis Who died young at forty-five years old Driven to death by the bottle, in 1958.”

“Even though my life was brief I enjoyed of everything I loved to run my chariot, Hooked on dance and sang a lot.

When I was a little younger Your sheep I did look after. Young and older villagers Just before I go to Judgment, May I have your forgiveness?”

“You have found the cross My grand-son made for me.

I’m Fiscus Grigore, a soldier, And went off to war in 1914, Where our troops were in Glaicia.

I died before our enemies’ guns. I’m not buried here, For they buried me beneath a fir-tree, Far from my home, which is here.”