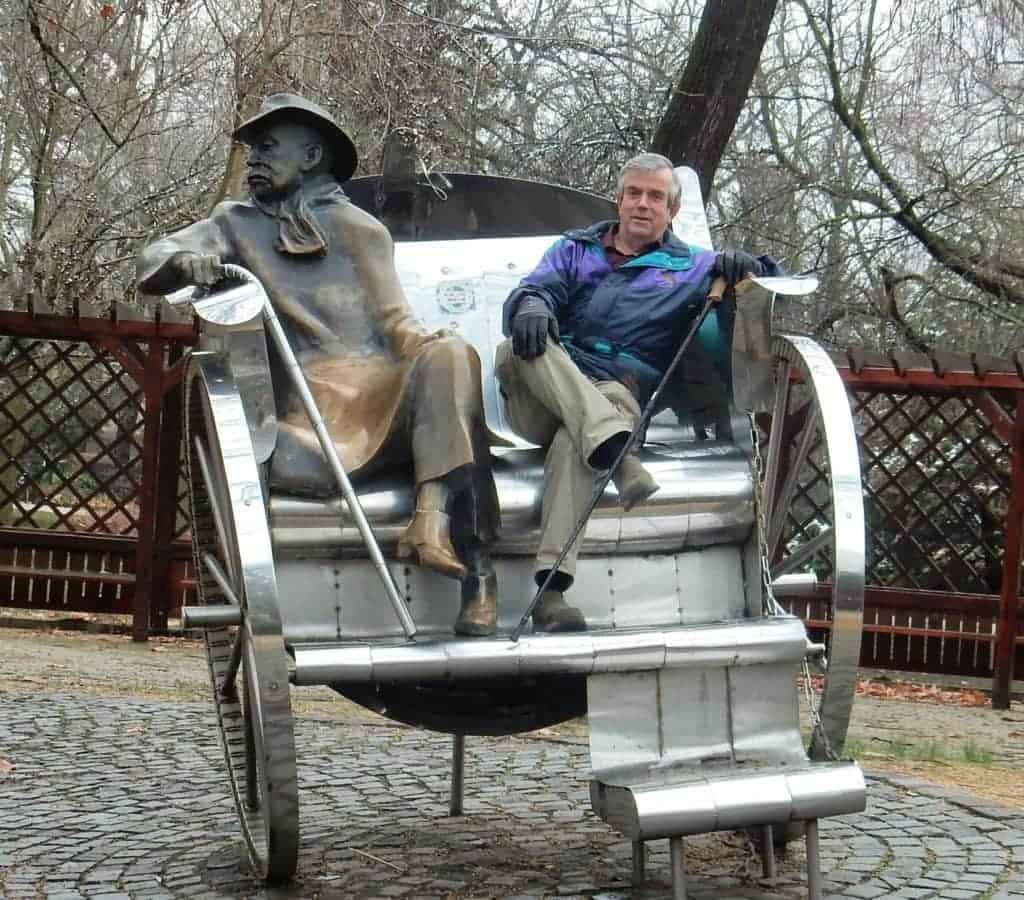 Lake Balaton, also known as the “Hungarian Sea”, is a huge tourist resort area. It is a couple of hours drive from Budapest. We are certainly not seeing it at its best: no leaves or greenery, boarded up shops and most of all NO PEOPLE. The number of hotels and rental apartments and campgrounds is almost unbelievable but they all have one thing in common. They are all closed. All along the lake are tourist areas that almost run into each other. They all look somewhat decayed and dismal with everything boarded up and completely deserted. For some unknown reason, Mike really likes the contrast between the closed-up look, the somewhat dilapidated pedestrian areas and the knowledge that, in the high season, the area would just be hopping with visitors. The amount of accommodation, the number of stores, bars, and kiosks closed for the season indicate just how busy it will get. Mike and I had one large problem. With the largest number of campgrounds we have ever seen in one area, we hadn’t expected to have nowhere to stay. Not one of them on the south side of the lake is open yet. In Hungary you are supposed to stay in campgrounds and not park just anywhere like. On Friday, when we couldn’t find a campground, we spent the night in a rest area off the side of the highway. Luckily, we weren’t hassled and the next day we drove around in the car. We still didn’t find an open campground, but we found something better. On a road next to the lake is a gas station and a closed campground that are related. Just in between the two is a large, private parking spot with an electric outlet. The gas station has given us permission to park there, overlooking the lake. We can use the electricity and we get internet from the gas station. We offered to pay but they said no, how nice. They actually offered us the keys to their washrooms which are locked at 9pm at night. Mike told them thanks, but it wasn’t necessary. I expect that we will use this as our base and stay for a week and then move to the other end of the lake where there is supposed to be an open campground. Mike has found somewhere in town that will do an oil change on the Lincoln on Thursday. He couldn’t find anything like Midas with its “no appointment necessary” approach. Lake Balaton has great cycling and walking trails, castles and abbeys, towers with panoramic views and hot springs or thermal baths. So far, the weather hasn’t been warm enough to get the bikes out and give them a good test. I am thinking that even if we have to wear warm hats and gloves, we may test the bikes sometime in the next few days. The temperature won’t be much above freezing but we have been promised that the sun will appear.

Today we took the car on the ferry and then drove around the northeast end of Lake Balaton. These areas include some of the most expensive houses in Hungary, owned by people with the highest per capita income in the country. Lake Balaton is extremely popular. Good luck if you want to moor your boat along the lake. I read that in some areas all the berths have been allocated for years. This might be a very popular area, but the lake can be very dangerous. There can be very dangerous winds and waves along the lake. In the 1930s and 40s they used sirens and signal baskets as gale warnings. From the 50s until the 80s the arrival of a storm was announced using cannons and rockets. Today they have more than 30 large, revolving lights along the shore, like mini lighthouses. These lights flash with different colours and speeds to indicate the imminent weather. These help a lot but there are still quite a few deaths by drowning in this lake. Here is something that I read on the internet about Lake Balaton, while not nice, I found it interesting. “The most sudden and intense storms come from Slovenia and move in a line. When the wind rushes from the clouds and hits calm water, its speed can be high enough that waves do not even have time to form. The wind picks up the water, creating a curtain of water above the surface, appromixately 1 meter in height. The air within this layer contains so much humidity that the lungs of a person swimming beneath it can fill with water, causing them to drown.”

Parking in Hungary is relatively inexpensive, but the parking machines only takes coins or a special parking card. This makes it very difficult as Mike and I never have enough coins between us and I believe that they are very serious about parking tickets. Food in Budapest is roughly the same as at home but when you get outside the big city the prices drop dramatically. The food is very good in Hungary which, quite honestly, I wasn’t expecting.

All the homes are surrounded by security fences and locks which Mike and I find a little disconcerting. This isn’t only true in the city, but everywhere, including rural areas and small villages. Although the implications of this level of security are not nice we have never seen any problems or felt unsafe while we have been here.

As I was going into one church to have a look around I heard some noise and a bunch of ice fell off the roof onto my head and shoulders. Luckily, I had a thick hat and coat on and much of it missed me. Mike said that some of the pieces were the size of fists. We also had an incident where a woman ran right out in front of the car. Mike slammed on the brakes and scared me to death. We assume that because our car is hybrid and was running in electric mode, she simply didn’t hear us. It is scary to think that in an instant so much could change.

Sometimes, when travelling, you just see things that confuse you. The other day we came to a traffic light that was green and had a stop sign on the road. What is one to do?

We will be leaving this site on Friday and moving to the north side of the lake, assuming that the campground is open. There we will be much closer to the thermal baths which I think is great although Mike isn’t as keen. He has promised to “consider” coming into one with me.