Back to our second home again! We left Canada 10 days ago. We stopped in London to visit my Aunt who is 95 this year. She still lives alone, is upset that she voluntarily gave up her driving license at 90 and is as mentally sound as anyone you could meet. It was lovely to go out to lunch with her. We were joined by Phil and Claire, a first cousin once removed and his wife. For anyone reading this who has to look up that relationship, it means your cousin’s child. I hadn’t met them before and we all spent a very enjoyable afternoon together. I would have liked more time with Phil and Claire. Apparently, about 15 years ago they spent a year back packing around the world. I like my motorhome comforts, but I would have liked to have had enough time to hear their stories. The next day we had lunch with another first cousin once removed on the opposite side of my family. Jane had visited us in Canada not very long ago. Given that when we arrived at my aunt’s house I hadn’t slept in over 24 hours I thought that everything went very well. Hi to my cousins in Manchester and sorry that we didn’t make it this trip.

When we arrived at the airport in Budapest Joska and Jutka, who have been kindly storing our RV in their backyard for the winter, were there to pick us up with their daughter Andrea and granddaughter Hanna. Google Translate instantly came into play. Without it we could communicate by saying hello and thank-you. While helpful, those two phrases don’t make for great conversation. Our hosts have been unbelievable. Here I am worried about us abusing their hospitality and they just keep doing more for us. The other day Joska came to the door of the RV with a few red and white roses for me. I hadn’t realized that it was International Women’s Day. What a nice and unexpected gesture.

With Google Translate always present, we have eaten dinner in their house multiple times, we dined in a restaurant and we spent a couple of days driving around and touring different towns outside Budapest. It has been lovely. Mike and I constantly have our phones out and whoever wants to talk points to the phone and we hit the conversation button and things get translated. Although it isn’t always perfect it is more than good enough to be able to communicate and actually enjoy each other’s company. It seems to work better for Mike than for me. For some unknown reason, all my life I have had problems with machines recording my voice. In the days when you dictated your telex’s to be sent I was asked to have someone else dictate for me as my voice appeared to stop on the tape. Even today voice mail machines will simply quit recording my voice. It isn’t like I am too quiet! Mike and I have never understood why, we just know this happens.

Joska, our host, had “told” us that if we thought Budapest was lovely during the day, it was even better at night. He was correct. The bridges and the major buildings are all beautifully lit up. In Toronto at night, if you don’t know where the CN tower is you can’t even see it on the skyline. Over time, with LED lights, some of the cost and environmental concerns have lessened. I think the remaining costs would be offset by the benefits to the beauty of the city and to tourist dollars and indirect advertising. The parliament buildings in Budapest are shown in all sorts of photos and advertisements for the country and are immediately recognizable. Many of the tourist photos are lovely night views. Toronto should take some lessons. Below is a night shot without the parliament buildings.

Mike and I rented a camper 15 years ago and toured around Central Europe. At that time my favourite city was Vienna although Prague and Budapest were close. Budapest was Mike’s favourite. We are really enjoying taking the time to see more of the city and the area. It is lovely. The only problem is the number of people that agree with us. It is only the first week of March and the tourist locations are relatively busy. What must it be like in the middle of the summer?

Mike and I often take the hop on hop off tours to get oriented in a city. We usually stay on and ride the bus fully around once. When I looked for a hop on hop off tour in Budapest, I found a large number of companies to choose from. Each company offered multiple “lines” that you can ride with one ticket. Each line or tour is about 1 hour long and highlights different attributes of the city. The company we chose had 7 lines running every half hour as well as a boat tour and a walking tour. All were included in the price. This meant that between the different companies, and different routes, there were between 30 and 50 buses running at the same time, off-season! In most cities there is one route with a few buses going around it. This is the first week of March and the buses were 1/3 to 2/3s full. As much as we are enjoying this city I am glad that we aren’t here in high season. High season is lovely for the “second or third tier” tourist cities. The cities that aren’t phenomenally overcrowded and where the locals also vacation. In these towns you will often find music playing on the streets and open air markets or street vendors, during the summer. They are lovely then and you will have room to appreciate them. I am more than happy to avoid cities that are really popular, such as Paris and Venice and probably Budapest in the high season. We only get to see a few of the cities in high season because summer just isn’t long enough and once the students go back to school the music on the street corners ends.

As you probably know, the Danube River runs right through the centre of Budapest. Originally the two sides were two different cities: Buda, on the west side of the river and Pest on the east. Although they are now one city they still always talk about the Pest side and the Buda side. They are quite different. The Buda side is the older historical area where lots of people live. The Pest side is the flatter more modern side. This is where the Parliament buildings are. The boutique shopping, bars, discos etc. are mainly found on the Pest side. During WWII there were 8 bridges connecting the two parts of Budapest and all 8 were blown up. They have since been rebuilt and expanded. 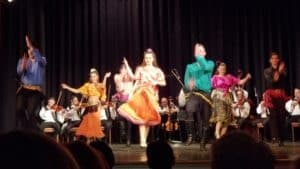 Mike and I went to the Danube Palace to watch and listen to a Hungarian Folk Music show. A highlight of the orchestra was an instrument called a cimbalom. Mike said that he thought it was like a piano without keys. The musicians played it using various “drumsticks” and occasionally plucking the strings. As marching bands have various drumsticks, some with more padding on the end than others, this was also true of the sticks used to play the cimbalom. During a solo they turned off the lights and the musician continued to play, unbelievable but really good and very interesting.

The picture below was a very well done Holocaust Memorial.

Outside of Budapest is a large wine growing region and a lot of thermal spas where the water comes out of the ground around 70⁰ C (158⁰ F). During the last two days, Joska and Jutka toured us around various towns. Yesterday we had our bathing suits with us in case we decided to test out the waters. In the end we spent too much time touring castles, churches and drinking wine. Our hosts bought me a bottle of locally grown Medina wine because they knew that I preferred a sweet wine. I had never heard of it before, but I quite enjoyed it. We keep trying to remind them that Mike and I are supposed to be treating them to say thank-you and not the other way around. What looks like snow and ice in the picture is really just minerals and steam.