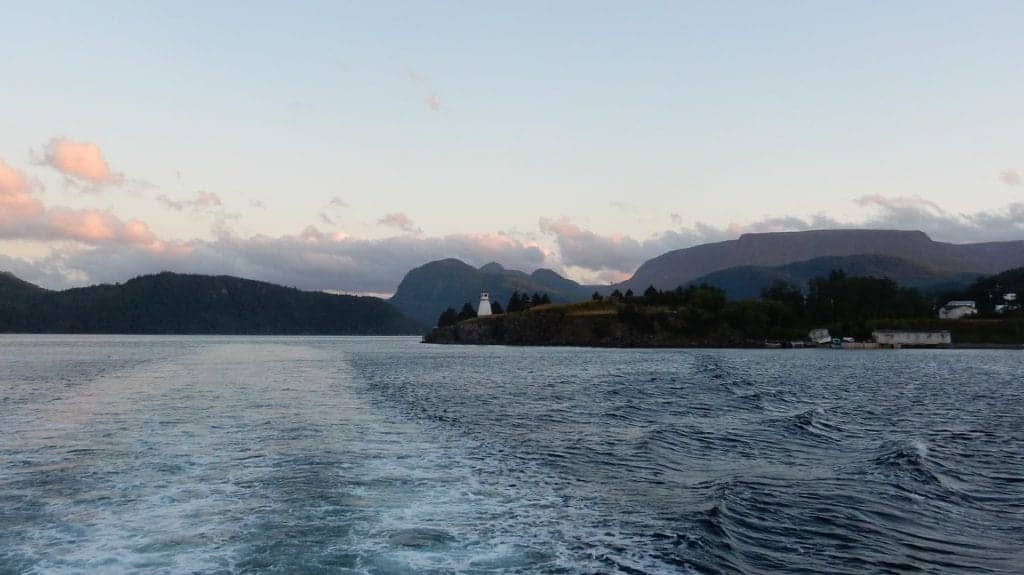 We are having a great time in Gros Morne and went on a superb boat ride tonight.  We weren’t sure that it would happen as the weather has been strange ever since we entered the park.  It has rained every morning and cleared up later every day.  For the last two nights we parked the RV on docks out on a point in Rocky Harbour.  A local had told us that he had seen campers here before and he thought it would be fine.  It was a very exposed spot with water on three sides.  It was lovely, at least until early this morning.  At about 7:30 AM the wind was howling around the RV.  It sounded to me like gale force winds buffeting our home.  It was actually somewhat scary lying there in bed.  The wind did die down somewhat and the sun came out and it was the warmest day so far.  It was supposed to get up to 20C or 68F today.  That is the warmest it will be for the rest of the week.  Mike and I felt a little bad, as we left the docks this morning there were three city workers installing a “No Camping” sign even though they hadn’t said anything to us.  I guess 36 hours there was overstaying our welcome.  Being a national park and quite touristy, this is the one area where you have to look a little harder to see where you can stay overnight if you don’t want to use a campground.

Over the last few days we have done a little bit of walking.  Most days are multiple walks.  Two days ago we had a lovely 6km walk along the coast that was quite easy but a little too muddy in parts.  Yesterday we went for what was supposed to be a more difficult 10 km walk to some lovely waterfalls.  It wasn’t actually difficult but by the time Mike had finished adding on “optional” side legs I was getting a more than a little tired.  One of the side legs was to see a Moose Exclosure and yes I spelled that correctly.  About 7 years ago the park decided to build a high fence around a 100 metre square area.  The fence allowed smaller animals under it but prevented the moose from entering this area.  The intent was to demonstrate the effects of moose on the forest.  The favourite foods of moose thrive inside the exclosure whereas outside only plants that moose won’t eat do well.  Even in a few short years you can see a big difference.  Moose are also very hard on trees.  The devastation that they left in some areas reminded me of the problems elephants cause in the parks in South Africa.

Today we did a much shorter walk but given the up and down hill nature and rough terrain it required much more energy.  I feel done in when my step count isn’t high enough and yet I have worked at it really hard on some walks.  Actually none of these walks are what a purist would call hiking.  Many of the paths are 50% boardwalk and all are fairly well defined.  There is no really steep climbing or anything really tricky.

Tonight we switched gears and went on an evening cruise on Bonne Bay.  We had a great time.  Near the beginning of the cruise I overheard the tour director asking the captain to try and aim for the sunset.  I wasn’t sure what he meant.  The captain managed to bring the boat around a point of land just as the sun was setting.  You watched as the sun dropped below the surface of the water.  It was gorgeous to see.  The evening cruise is more relaxed and less “educational” than the regular daily cruises.   It turns out that everyone involved with the cruise was a musician which I found interesting.  The tour director played in a band three days a week at a hotel Mike and I had actually stopped at yesterday for lunch.  One of the boat employees had recently heard the musician who was scheduled to entertain us.   He decided that the music would sound better with two of them.  He arranged to bring his guitar on board.  He and the scheduled musician had never played together before.  They said it was just like a local “kitchen party” where various musicians get together and basically hold jam sessions.  The entire cruise was a lot of fun.

We are again parked where we probably shouldn’t be.  It is only for one night so I am not concerned.  Depending on weather we might put our boat in the water here tomorrow afternoon.  We will then head to a different section of Gros Morne later in the day.