It is 9pm on Monday night and I am sitting alone in our RV in a parking lot in Fort McMurray.  10:30 Monday morning we left Fort McMurray heading south.  About an hour later a truck flagged us indicating some sort of problem.  We pulled over to the side of highway 63 which is considered the most dangerous highway in Canada.  We are about 50 km south of Fort McMurray at this point. We got out and discovered that the Lincoln that we are towing was missing the rear passenger tire.  Unbelievably the rim was there and about an inch of the sidewalls but the rest of the tire was completely gone.  At least the wheel was away from the traffic.  We unhooked the car, got out the tools we needed and Mike bent down to have a closer look.   At that point in time I heard some very unhappy grunts coming from beside the car.  It turns out that the wheel has a special nut on it to prevent it from being stolen.  The case in the car with the jack and tools to change the tire doesn’t include anything to remove this nut.  I checked the owner’s m 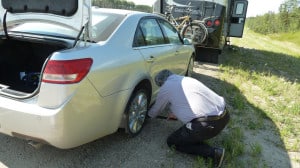 anual under changing tires and this special nut and special tool requirement wasn’t mentioned.  Eventually Mike gives up and we leave the car and drive the RV almost an hour to the Ford/Lincoln dealership in Fort Mac.  They lend us some tools to try and remove the nut.  They tell us that if we need a tow back to them it will be about $500.  They have one tire of the correct size but it is from a different manufacturer so we go to Canadian Tire.  They also only have one tire that will fit but if we are changing manufacturers then we need to change both rear tires which is a problem.  We drive back to the car and after an hour or so Mike gives up.  The toolset the dealership lent us was actually only ½ of a set of tools and was missing the size that we needed so we call a tow truck.  This takes another hour or so.  Then it is back to the Lincoln dealership.  Mike spends ages in the dealership (while I sit in the waiting room) trying to get them to work on the car.  The Lincoln Service Centre doesn’t know how they will remove the rim from the same model of car that they have sitting on their sales floor.  What a mess.  At 9pm I give up and head back to the RV parked a block away.

Addendum: 10pm Mike is back.  The dealership eventually told him that it would be a 10 minute job to remove the nut and install the spare tire.  He has just returned with a bill for more than $400 all labour (except for the cost of a replacement stud which they damaged because they did not have the right tool).  We are not happy campers.  The campsite next to the dealership is closed and looks full anyway so we have parked in the Shell gas station next door and hope we don’t get woken up and told to move in the middle of the night.  When we pulled off the highway originally the side of the road was on a slope and we have lost all of our fresh water.  No showers in the morning for either of us.

Apparently there is another company in town, actually just across the highway, which can provide us with new tires and could probably have removed our tire quickly.  We weren’t told about this until after our car was taken off the tow truck and the tow truck left.  Hopefully tomorrow will go better.  I will let you know.

Addendum 2: Tuesday morning, while I slept Mike unsuccessfully drove around Fort Mac to purchase new tires at a somewhat reasonable price.  It is now 9:00 AM and we are on our way to Canadian Tire in Slave Lake (450 km/280 mi) to purchase four new tires that are on hold for us.  The car has the small spare on it so we will be driving even slower than normal. Good job that I have my entertainment with me in my house on wheels.

2 Responses to "Rubber on the Road"