Mike and I have just spent a very pleasant three days in Fort McMurray.  We have family there and they did a great job of entertaining us and showing us around.  The first things that you notice about Fort McMurray are the pickup trucks.  They are everywhere.  Subdivision streets become single lane roads because there are pickups parked up and down both sides of the road.  I will say that our niece was driving probably the nicest luxury pickup truck that I have ever seen. The weather turned much cooler for a few days and there was actually frost at night but the days were lovely to wander around in.  Apparently they have had a gigantic temperature drop in the last week and expect it to rise again over the next few days.

The official recorded population of Fort McMurray is about 75,000 people but based on water consumption they estimate that there are over 100,000 residents.  Many of the homes rent rooms and basements to oil sands workers.  These residents are very hard to track.  This doesn’t include the 80,000 workers living out at the camps on the oil sands.  The picture above shows some of the residences for the additional 80,000 workers living on site.  In the background you can see lots buildings housing big productive machinery.  That is my husband’s idea of beauty.  Everything here is quite expensive for two reasons.  One is that all goods have to be shipped from Edmonton up north.  The other reason is because the population can afford it.   Oil sands workers are very well paid which is also reflected in the standard wages in town.  The average male in Fort McMurray makes $150,000 per year while the average female makes $75,000 per year.  This income is more than double the national average.  Everything in town seems to revolve around the oil industry, their shift hours, their on and off schedules etc.  Everyone knows that if there was no oil there would be no real town. 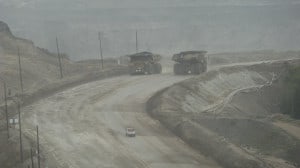 Mike’s sister booked the three of us on a four hour bus tour of the oil sands which Mike really wanted to see.  At the end my mechanical engineering husband asked if I had enjoyed it as much as he had.  I told him that with my ereader along I had a fine time but that I probably didn’t appreciate (or understand) it quite as much as he did.  What I did learn was that the heavy equipment that they use in the oil sands are among some of the largest pieces of machinery you will ever see.  The small little tonka toy truck just in front of the heavy haulers in the picture is a full size pickup truck.  The heavy haulers each have six tires and each tire is worth about $80,000.  That is almost half a million dollars just in tires on one vehicle and they have lots of them.  The tour guide was telling us that when she walks her dog by the edge of the river the dog will sometimes get her feet and legs covered in bitumen which is basically like tar.  That is how close it is to the surface the oil sands are in some parts of the area.  The sky was blue and visibility was extremely clear.  It was what, as pilots, we used to call a CAVOK day.  Apparently one of the major pieces of misinformation that upsets the residents is about the supposed air pollution up here.

Apparently restaurants like the local Tim Horton’s and McDonalds are the highest grossing stores in their chains in Canada.  Tim Horton’s used to have the longest line-ups in Canada.  They were so bad that they went outside the parking, down the street and actually blocked the highway.  It got to the state where the local police were giving our $179 fines for stopping on the highway which makes for a very expensive cup of coffee. There are now three Tim Horton’s in town. 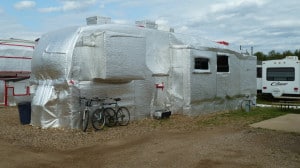 I will tell you something strange about this town.  Fuel prices on the south side of town are 7 cents a litre (27 cents per US gallon) cheaper than on the north side of town and it is a small town!  This was true the entire four days we drove around the town.  The other strange item is that people willingly live in an area where -30 C (-22 F) is common for weeks on end and -40 C/F is not at all uncommon.  We stayed in a motorhome park open all year round.  From an aesthetic point of view this was, by far, the least attractive campground we had been in.  It wasn’t really designed for transients like us but more for the oil workers who live there when they are in town.  As you can see in the picture many of the RVs were wrapped in insulation to get them through the local winters.

My thanks to everyone in Fort McMurray for showing us a great time and good luck to our niece who is expecting a little daughter in just over a month.